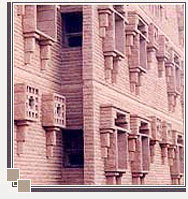 Sandstone is basically a sedimentary rock which is primarily composed of tiny minerals or rock grains. A majority of sandstones are composed of minerals like quartz and feldspar which are present in the earth's crust in abundance. The common constituents of sand are quartz and feldspar. The sand may also consists of organic matter or rock fragments.

As sandstones are made of sand, the properties of sand and the sandstones are almost the same. The colors of sandstone vary with the amount of impurities present in the sand. The chemical compounds like silicon dioxide or silica, calcium carbonate, and iron dioxide act as natural cementing agents to hold together the sand in the form of a rock that we know by the name of sandstone. Chemically, sandstone is an absolutely impervious and monomineralic rock that is primarily composed of quartz.

The percentage of various constituents of sandstone varies between the following ranges: